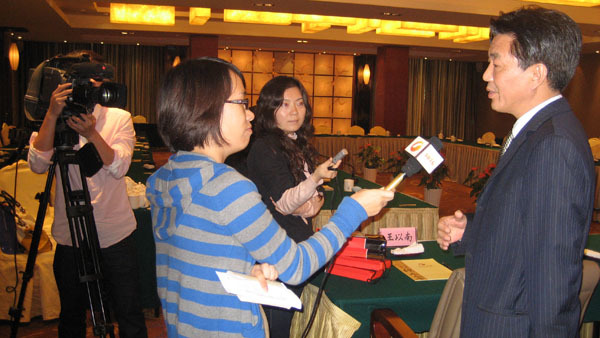 The golden wind brings you a pleasant autumn. On the morning of October 20, the Second General Meeting of the Seventh Chain Drive Branch, organized by the Secretariat of the Association, organized by Zhejiang Machinery Co., Ltd. and co organized by Shengzhou Special Chain Wheel Factory, was held in the banquet hall of Shengzhou Hotel. More than 80 enterprise presidents and representatives from all over the country attended the meeting. Liu Yuanjie, honorary chairman of China General Machinery Parts Industry Association, Xuan Bihua, chairman of Chain Drive Branch, and Qi Fangliang, vice mayor of our city attended the meeting.

The meeting was chaired by Xuan Bihua, Chairman of the Chain Drive Branch. Qi Fangliang, vice mayor, on behalf of the municipal party committee and the municipal government, congratulated the opening of the conference. He introduced the basic situation of Shengzhou to the delegates, focused on the industrial structure of our city, and pointed out that as one of the three pillar industries of Shengzhou, the electrical machinery industry has more than 50 manufacturers and more than 4000 employees. With a deep industrial foundation and complete supporting facilities, it has become the main export base of mechanical chain wheels nationwide. Vice Mayor Qi also introduced the upcoming 3rd Shengzhou Electromechanical Exhibition to the bosses, and welcomed entrepreneurs to visit and investigate. The Chairman of Zhejiang Zhongyi Machinery Co., Ltd. delivered a welcome speech on behalf of the host (the full text will be issued separately). Then Li Zhili, the director of the branch secretariat office, announced the key points of the "12th Five Year Plan" development plan, focusing on the basic overview of the preparation of the Plan and the basic spirit and main content of the Plan. According to the goal of accelerating the realization of the "manufacturing power" of chain drive products, the "12th Five Year Plan" of the chain drive industry will speed up the transformation of the industry development mode as the main line, optimize the industrial product structure, and actively implement the "going global" strategy, We will promote industrial transformation and upgrading, build a modern industrial system, and constantly improve enterprises' independent innovation capabilities and industry core competitiveness. Zhu Shanxiang, honorary chairman of the Chain Drive Branch, made a report on the "Proposal on Building a Cooperative Development Mechanism for Enterprises in the Chain Drive Industry" (draft for deliberation). Wang Minliang, Secretary General of the Association, made a report on Suggestions on Building a Cooperative Development Mechanism for Enterprises in the Chain Drive Industry. After full deliberation and discussion, the conference unanimously adopted the report by acclamation. Cui Hua, Deputy Secretary General of the Association, made an analysis of the economic operation of the whole industry in the first half of 2010 under the title of "The situation is developing happily and the prospects are cautiously optimistic". Finally, Liu Yuanjie, the honorary president of the Federation, gave a speech. He fully affirmed the work of the Secretariat of the Association, and believed that the industry's "Twelfth Five Year Plan" was clear in guiding ideology, precise in positioning, practical in measures, and focused on key issues. It was a strategic, forward-looking, referential and operable programmatic document, and would certainly bring far-reaching significance to the development of the industry. He spoke highly of the practice of enterprise cooperation and development in the chain drive industry. He believed that this was a highlight of the conference and also a major initiative of the industry association. Next, we should pay close attention to the implementation. The association should be good at acting as a matchmaker, threading the needle for cooperation between enterprises, and really play the role of the association as a bridge and link.

On the 21st, the delegates visited Zhejiang Zhongyi Machinery Co., Ltd., learned about the production and operation of Zhongyi in detail, and put forward many constructive suggestions on the management of Zhongyi. Accompanied by Chairman Wang Yinan, the representatives also visited the Zhongyi Industrial Park under construction with great interest.